August has been a really good month for my makeup and skincare addiction. I’m not sure if that’s a good thing or a bad thing, but in any case, I’ve spent some money this month, and I’ve gotten some pretty good stuff. I had a spectacular e.l.f. haul, which added to some brand new essences and first cleansers, which I can’t wait to test out. I got the Naked Heat palette and discovered my love for red and orange eyeshadows. My Sephora Play box for August (which will be reviewed shortly) had some fabulous items that I loved and had a retail value of over $50.

And then there was this. This is only the second time I’ve seen Sephora offer a super special Play box (no subscription required), and the last one was only available to Rouge members. This one is now available to anyone who wants to buy it. I didn’t get the last one because I wasn’t too excited about the products they mentioned. (Tom Ford’s Black Orchid is okay, but it smells weird on me after a while. Plus, it included a second perfume sample.)

This time, I saw mention of a Tom Ford makeup product, which is a WHOLE other situation, in addition to skincare products from two brands I adore AND a bonus Victor & Rolf fragrance (and I knew what it had to be), and snatched one up on Tuesday. It was on my porch the next day– not my typical Flash shipping experience lately, and I’m definitely not complaining. END_OF_DOCUMENT_TOKEN_TO_BE_REPLACED

I feel like I’m finally getting caught up a bit. My June Sephora Play box is the last subscription that I’ve received and fully tried out but hadn’t posted a review for. I’ve been doing a pretty good job of getting through the products included, too, so I’ve even been able to make some progress regarding my stockpile. When you get more than one of these sample boxes every month, it piles up quick!
Sephora Play is a monthly subscription that sends deluxe beauty samples and a bonus perfume sample to your door every month for $10 plus sales tax. Shipping is free. The items included can all be found at your local Sephora store and/or online, and the box includes a Play Pass that can be redeemed in stores with any purchase for an additional 50 points toward your Beauty Insider account. As you’d expect, Sephora encourages Play members to visit stores and receive help with any items included in their boxes. There’s even a monthly meetup at select stores. That drive isn’t going to happen anytime soon.

END_OF_DOCUMENT_TOKEN_TO_BE_REPLACED

Sephora Play is a monthly subscription that sends deluxe beauty samples and a bonus perfume sample to your door every month for $10 plus sales tax. Shipping is free. The items included can all be found at your local Sephora store and/or online, and the box includes a Play Pass that can be redeemed in stores with any purchase for an additional 50 points toward your Beauty Insider account. As you’d expect, Sephora encourages Play members to visit stores and receive help with any items included in their boxes. There’s even a monthly meetup, but the closest one to me is in Atlanta. That drive isn’t going to happen anytime soon.

END_OF_DOCUMENT_TOKEN_TO_BE_REPLACED

Sephora Play is a monthly subscription that sends five makeup and skincare deluxe samples and a bonus perfume sample to your door every month for $10 plus sales tax. The items included can all be found at your local Sephora store, and the box includes a Play Pass that can be redeemed in stores with any purchase for an additional 50 points toward your Beauty Insider account. And as you’d expect, Sephora encourages Play members to visit stores and receive help with any items included in their boxes. (There’s also a monthly meetup, but the closest one to me is about two hours away, so YMMV on this feature depending upon where you live.)
While I’m a self-diagnosed subscription box junkie, I had to cancel most of my beauty boxes after acquiring a gigantic stockpile of makeup and skincare. Sephora Play was one of two boxes I kept. (Mask Maven was the other.) I figure I can make it through the contents of just one box per month, and so far that’s worked out pretty well for me. END_OF_DOCUMENT_TOKEN_TO_BE_REPLACED

It seems like just yesterday I was opening my February Sephora Play box, but that’s probably because I got it so late. Sephora was on the ball in March, though, so I got my box pretty darn quick.
This month’s theme was “The Gleam Team” and for the most part featured products aimed at giving you a glow, whether that’s highlighters or (for some) shimmery eyeshadows and lip products. Each month, you’ll get a unique draw string bag that is designed around that theme. It looks like this month takes us back to the white jersey fabric, but then I suppose we couldn’t have satin and mesh forever.

END_OF_DOCUMENT_TOKEN_TO_BE_REPLACED

February was a good month for me with Sephora Play, though I didn’t get my box until March 1. This wasn’t supposed to happen, mind you. My box had been shipped on February 14, but due to some shipping issues, it never arrived. I’m not sure if this is an ongoing thing with Sephora and whoever is shipping their boxes, but it’s the second time this has happened to me in under six months. Nevertheless, both times it’s happened, Sephora has been great about handling the problem. A few months back, they refunded me the cost of my box, though it did eventually arrive. This month, they simply shipped me a new one.
Since one can pretty much expect that something will happen eventually with a product being shipped to them, this is what makes the difference for me when it comes to customer service. To me, this was a good way to handle the issue, and I can at least say that I’ve dealt with their customer service and can give them a good review.

END_OF_DOCUMENT_TOKEN_TO_BE_REPLACED

Much like my Memebox order, this month’s Sephora Play also went through some bumps here and there. After a full week of waiting for it to arrive with no updates on the tracking information, UPS straight up told me that it had been lost. Since Sephora doesn’t have extra boxes laying around to send, that meant that I wasn’t going to get October’s box. I called up Sephora’s CS and explained the situation, and they promptly issued me a discount. Two days later, the box mysteriously arrived.

I called Sehpora and told them as much. They’re letting me keep the box and not re-charging me for it, which is swell. I’m tickled pink, since there were a couple of items here that I was looking forward to trying out.

Sephora Play is just $10/month for five deluxe samples and one bonus perfume sample. As you might guess, the box includes items sold at Sephora stores. The samples can be tiny, but if you’re a Sephora shopper, they’ll include brands you might actually be inclined to buy. If you’re interested in signing up, you can click here to do so. Yes, there’s a waitlist, but you do see them open this up quite frequently these days. Just keep an eye out and keep trying, and you should eventually find a window.

This month’s theme was “The Cool Cut” and is supposed to include “breakthrough formulas, indie brands and products that truly stand out from the crowd.” END_OF_DOCUMENT_TOKEN_TO_BE_REPLACED

It’s that time again! It’s July, and I have a new Sephora Play box to play with! This is one of those boxes that I started out with high expectations for, then found myself underwhelmed as I saw all the reviews, then as I actually started experiencing it found myself loving. This has quickly become my favorite subscription not just because of the value but because of the curation and because of the interaction Sephora has worked into its subscription. Each box so far has had at least one one item that was added to my repurchase list, and as soon as I run out of product, I do plan to purchase a full size of those.

This month’s theme is “Effortless Summer” though I honestly don’t see much of a link between this month’s theme and the products included. It was the first month where a more customized box was sent to subscribers based on skin type. I got the box for oily/combination. Others got a slightly different box for normal/dry skin. END_OF_DOCUMENT_TOKEN_TO_BE_REPLACED 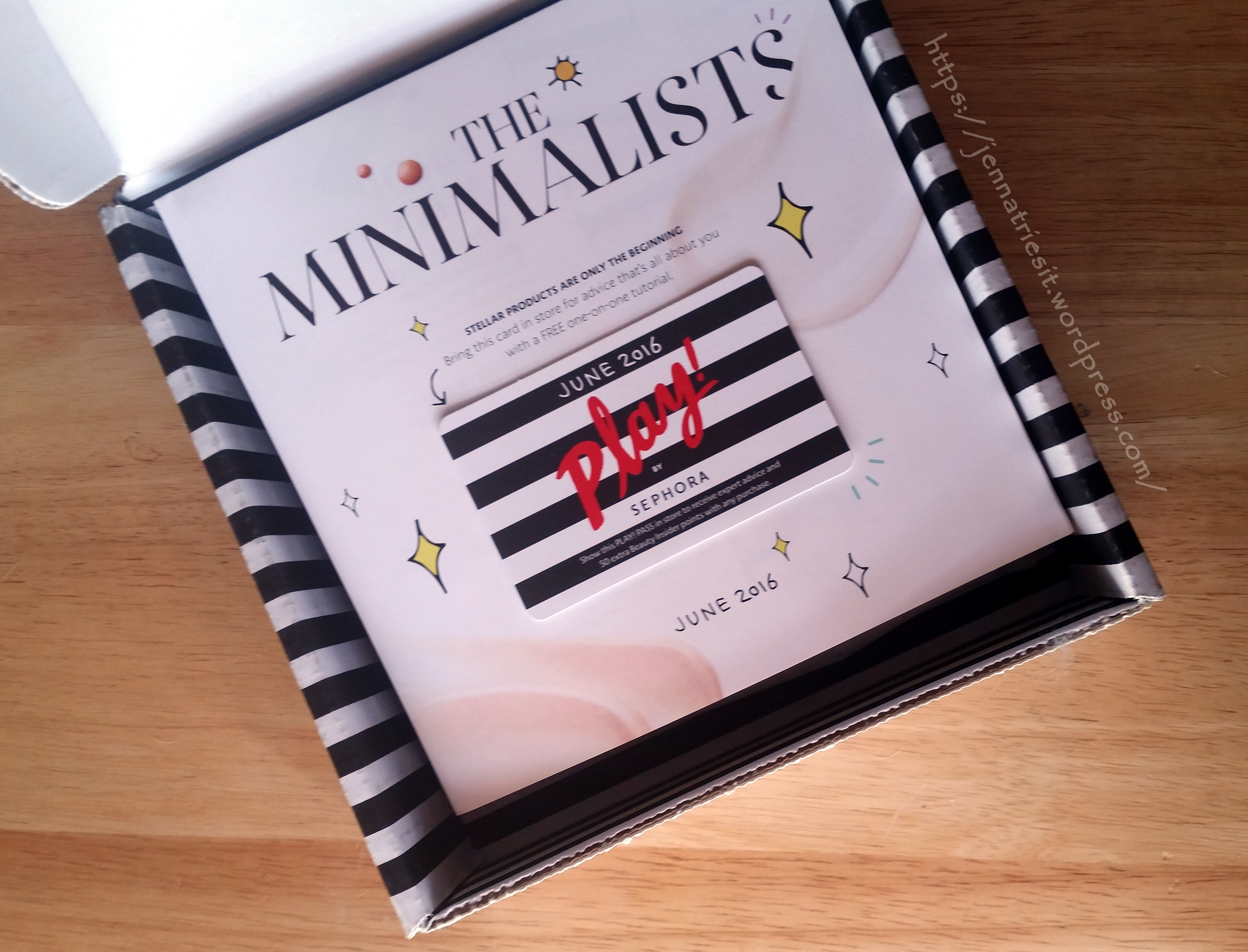 Admittedly, Sephora Play doesn’t have the highest value among my subscription boxes, and we’ll get to that breakdown shortly, but it does have what I believe to be one of the best curations with higher end items I use, and the other goodies like in-store classes and trials and bonus Beauty Insider points make this a very worthwhile subscription, particularly if you shop at Sephora. If you’re interested, there is a waitlist, but you can sign up here.

This month’s theme is “The Minimalist” and includes products to help you achieve that look. I think I had a much easier time understanding why items were included this month as opposed to last month’ theme. Sunscreen, bronzer, shimmering primer, and mascara are definitely what I’d call minimalist makeup, and the hair care item is designed to remove a step from your hair styling routine. This is absolutely a box that I’d say is designed to help you get ready and out the door more quickly in the morning. END_OF_DOCUMENT_TOKEN_TO_BE_REPLACED

I’ve been waiting ages to get off of this waitlist, and I’ve finally received my first box from Sephora Play! I’m not even going to mess around. I’m just going to jump right in…

Each month, subscribers will get a “play book,” which is a foldout detailing the items inside. This also includes a card that you can take into any freestanding Sephora (NOT a Sephora inside JC Penny) for a one-on-one tutorial as well as 50 extra points added to your Beauty Insider account with any purchase. END_OF_DOCUMENT_TOKEN_TO_BE_REPLACED