Ah… That was a nice week off!

Since I don’t do regular weekly confessions, I’ll make one now. I spent two hours on Friday arguing with people on the Internet about what a chicken nugget is. Why? Because, as someone who tries to (occasionally and not often enough, I’ll admit) eat healthy, I’m appalled that some people apparently think that THIS is a chicken nugget:

No. Those are Chicken McNuggets, and there’s a difference. I have strong opinions regarding this. See, I will Merriam-Webster this shit. 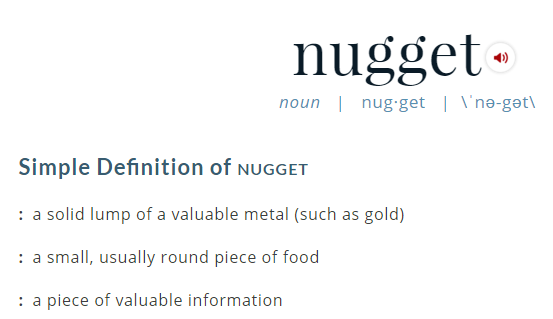 A “nugget” is basically a small piece of something. There are all kinds of food nuggets– steak nuggets, fish nuggets, veggie nuggets. So when someone who still for whatever reason thinks it’s compelling or funny to ask where the nugget is on a chicken, I tend to point out that they’ve just asked where the small piece of meat is on a chicken. The short answer is, it’s from whichever body part you want to cut into small pieces. It’s the equivalent of asking where the fillet is on a fish. So this is my face when someone asks in any way but jokingly where the nugget is on the chicken:

I get it. You’re about to try to make a point, and you’re going to tell me all about how nuggets are mechanically separated and fried in vegetable oil. Yes, McNuggets are. But not every fast food restaurant serves mechanically separated nuggets (see also, Chick-Fil-A). And there’s more to nugget-dom than fast food. They can be baked or grilled. You don’t have to buy them in frozen baggies. I personally enjoy cutting up my own chicken breasts and either grilling them or rolling them in breadcrumbs (with some egg, of course) and baking them.

Even if you’re getting your nuggets from McDonald’s, are you really expecting quality health food? I mean… The grilled Southwest chicken salad (which is delicious) is one thing, but we’re talking about Chicken McNuggets here. Do you honestly think anyone is interested in you telling them that they’re eating fried ground chicken product?

My point is this… Chicken is freaking delicious. Bite-sized chicken is even better and more fun. Dip away, my friends, and pretend you’re five-years-old again.

And lest we forget about how the dipping sauce is SO terrible and unhealthy and processed… Honey mustard is literally honey and mustard if you want to make it yourself. This is not complicated, people.

I’ve been seriously pissed at Sephora for months, because I feel like they’ve handled the rollout of their subscription box badly. There has apparently been no rhyme or reason to their waitlisting. It was available in areas where it supposedly wasn’t. It made no difference if you were VIB or Rouge. It made no difference as to how long you’d been on the list. People just randomly were getting invites. So I just started spamming the page. I put a bookmark in my “good morning” folder (all the sites I check first thing in the morning), and every day I’d punch in my email address. Well, on Friday I got a pleasant surprise… 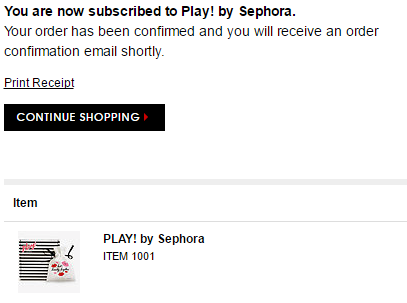 This is happening! THIS IS HAPPENING!!!

Over the weekend, I went to Tannehill with the kiddo and hubs, and my weak ankles got the better of me. My left one in particular has a nasty tendency to sometimes bend in toward the other foot without warning, and of course it picked THEN to do it. I didn’t fall, but my full body weight did land right on my ankle just as it was turned in. Like a champ (or a stubborn jackass) I decided to try and walk it off as I usually do. I ended up completing my 3-mile walk for the day, and my ankle swelled to the size of a small plum.

I did take an Advil and do the usual wrap, elevate, and ice routine. If it’s not looking any better by later today, I’ll probably wobble into the doctor’s office to see if it’s anything serious. Hopefully it’s not, but there you go.

So… How was your week?